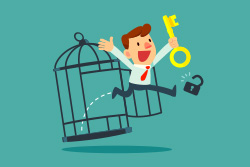 I knew that life was not supposed to be this way, but I always seemed to fall into trouble and act on my compulsions. I had a whole double life and I was tortured inside.

I had thought marriage would help, but after marriage it actually got much worse.

I went to a therapist under the pretense of “having marriage problems”. (I had to hide behind the marriage issue to get my wife to be OK with me going to a shrink). The therapist didn’t help. I even called a world renowned addiction expert who told me that I probably need a 12-step group. I couldn’t do that though – I thought, because my wife would find out (I couldn’t hide going to weekly meetings!!). Also, I felt that the whole complicated recovery thing would “cramp my style”. I resigned myself to thinking that the best I could hope for, would be to die at a ripe old age with a big, giant, ugly secret in my safekeeping.